A small company in Ithaca, led by a 19-year-old entrepreneur, has a robot they say can clean floors and will make beds. The robot is still in prototype stage, but the team behind Maidbot is hoping to bring the “Rosie” from The Jetsons-type machine onto the market within the next year.

Maidbot CEO Micah Green’s mother works in the hospitality industry, and he decided to follow suit and attend the Cornell School of Hotel Administration. A short stint in the field as a room attendant while taking a hotel operations class showed Green first-hand what the work was like. The apprentice paid close attention to each task, and he couldn’t help but notice the constant repetition.

“Vacuuming, reaching out and wiping mirrors or picking up a big king-sized mattress to stuff sheets under it…” says Green.


Maids and housekeepers have one of the highest injury rates in the hotel industry and in the entire private sector, according to a 2012 report by UCLA. Green immediately thought the workers could use some relief.

“Robotics in general focuses on dull, dirty or dangerous tasks. Housekeeping encompasses all of those,” says Green.

Over the last 10 months, Green and his team of seven have mapped out an extensive plan for the look, feel and launch of Maidbot. He says the first edition of the machine will focus on cleaning hotel floors, from the bedrooms to ballrooms and meeting spaces. Green chose not to disclose how much money has been put into the invention so far. He was, however, happy to finally have a prototype to show off.

“We have a [rotor that propels things] and an actual intake that we designed and created. And then we have the base plate that will have all of the wheels together. We have these really cool Omni wheels, so they’re multi-directional,” says Green. 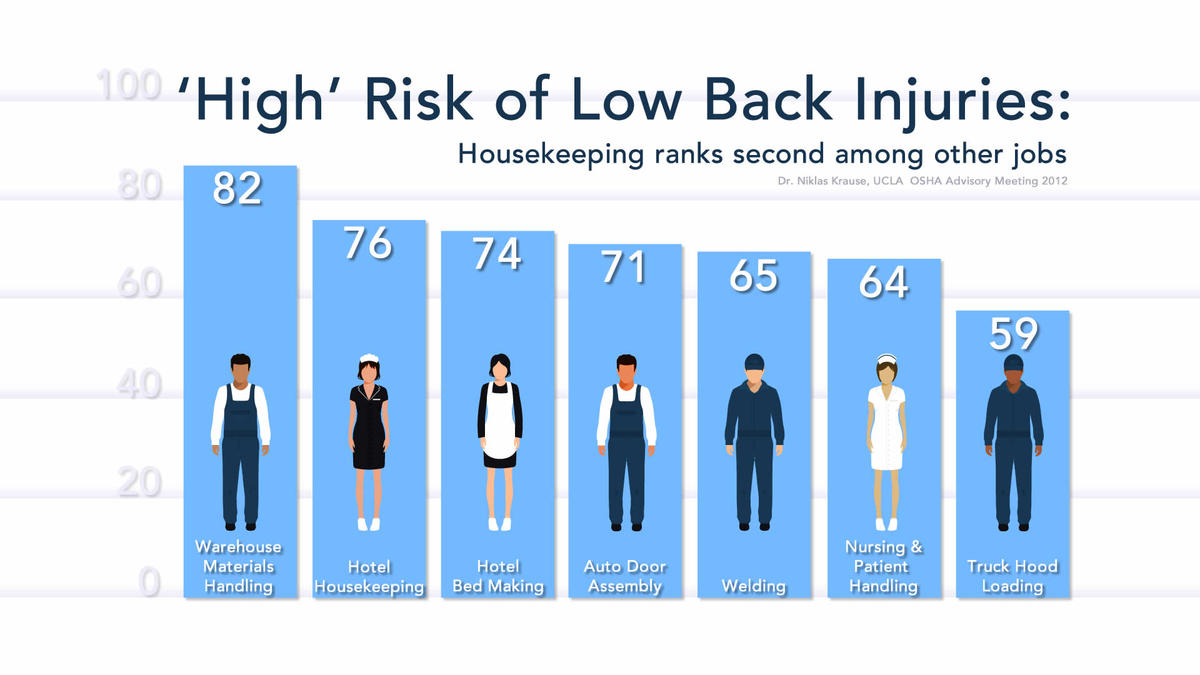 Housekeepers are exposed to known risk factors for musculoskeletal pain and injury, such as awkward postures, forceful movements, heavy pushing and pulling, heavy lifting, and frequent bending. Coming in at around 40 per cent, back injuries are the most commonly reported, followed by pains in the hand and wrist, and shoulder.

“As many as 69 per cent of injuries and illnesses are not reported. Ergonomic injuries are more subject to underreporting because they’re not as obvious,” says Grant Esler, a lecturer of occupational safety and health at Rochester Institute of Technology.

But musculoskeletal injuries are difficult to identify as work related, since they can happen while doing everyday tasks at home.

“Workers are reluctant to apply for workers comp. The musculoskeletal disorder column has been taken off the OSHA log, so it’s not called out specifically any longer like it was for a few years,” adds Esler.

Aside from injury prevention, the Maidbot team believes the hospitality industry is long overdue for some internal adjustments.

“It’s been the same for over 100 years. The biggest innovation in housekeeping has been an electric vacuum which came out in 1905,” says Green.

The team is working towards a version of the product that they can begin to test, which is expected to be ready by late spring 2016, and then begin a pilot program with hotels. Maidbot plans to send its machine to different hotel chains and ask for feedback. The housekeeping robot is anticipated to hit store shelves in January 2017.

“We’re not just trying to sell robots; we’re trying to sell time. If you just imagine the time that we could save by creating a product that does it for you, completely autonomously, to me that’s amazing,” says Green.

RedAwning launches VR rez platform for travel agents
Cliff Vars to Head Up HomeAway Software
We use cookies and similar technologies to recognize repeat visits, as well as to measure the effectiveness of campaigns and analyze traffic. By clicking "I Accept" you consent to the use of cookies unless you have disabled them.Accept