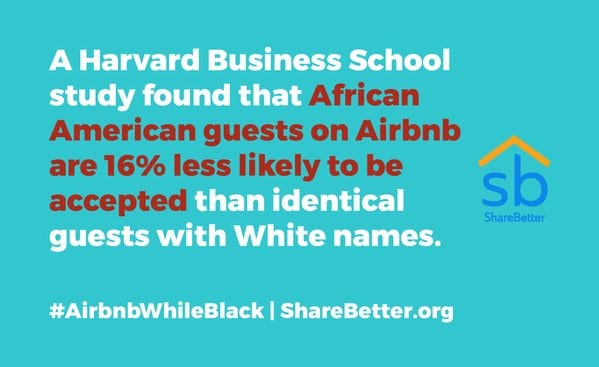 Airbnb has been all over the news lately, but this time not because of their high valuations, disruptive platform, uninhibited ability to raise capital, or even their regulatory battles.

This time Airbnb’s headlines are about discriminatory actions by “hosts” when deciding if a renter is “suitable” to stay in their short term rental property.

Editor Note: It is important to distinguish between Airbnb’s “hosts” and the professionally managed listings on the site, Professional Vacation Rental Management Companies operate as lodging providers and do not deny bookings based on race, religion, gender or sexual preference. It is simply against vacation rental management best practices to do so, and if they did, they would be sued immediately.

In doing research for the upcoming 2016 Summer Issue, we reached out to vacation rental homeowners who choose to self-manage their homes instead of using a professional management company, and the top two reasons homeowners gave for self-managing are the cost and “Knowing who is staying in my home.”

In case you’ve missed the headlines referencing Airbnb’s problems with discrimination, here is a recap followed by how the discriminatory actions of homeowners might lead to industry-wide instant booking on Airbnb and its competition.

In December 2015, a working paper by three Harvard Business School researchers found “widespread discrimination” by hosts against people with black-sounding names seeking rentals. Fictional guests set up by the researchers with names like Lakisha or Rasheed were roughly 16 percent less likely to be accepted than identical guests with names like Brent or Kristen.

Researchers set up 6,400 fake profiles of Airbnb guests and assigned them stereotypically white or black names, based on Massachusetts birth certificate data from the 1970s. None of the guest profiles had identifying pictures. They used the accounts to request bookings with hosts in five cities: Baltimore, Dallas, Los Angeles, St. Louis, and Washington, D.C. Airbnb hosts decide whom they want to rent to; requests from white guests got “yes” responses 50 percent of the time, vs. 42 percent for black applicants. The researchers controlled for a variety of factors, such as the host’s gender and ratings, and the “race effect,” as the paper described it, persisted.

As awareness of the problem increased, Tweets with the hashtag #AirbnbWhileBlack gained in popularity with users sharing their personal stories of discrimination.

I’m about to book an international @Airbnb so I’ve made my profile as white as I could. “I’m a writer & I love hiking.” #AirbnbWhileBlack 😞

Change your name, remove your picture, & add something about having multiple PhDs and flying for NASA. G’luck! @GeeDee215 #AirbnbWhileBlack

#AirBNBwhileblack is so stressful. One time some guy told me and @PerryFontaine that he was ‘waiting for a better offer’.

“We imagine a world where you can belong anywhere”….so long as you’re not black. #boycott Airbnb #AirbnbWhileBlack https://t.co/npBquwCj9s

I’m getting #AirBnBwhileblack-ed even when I don’t have any reservations…and I’m in town to run the AirBnb Half Marathon.

I assume it’s no coincidence that the front page of airbnb right now is a black person renting a white person’s house??? #AirbnbWhileBlack

In May, Gregory Selden, a 25-year-old African American, filed a complaint against the startup on Tuesday in Washington, D.C. He claims that an Airbnb host denied him accommodations when he requested a booking under his personal profile, which included a photo, but accepted the booking when he applied using two fake profiles of white men. Selden went to Airbnb with the issue, but he claims the company ignored him.

When Selden questioned the host, he told a local NBC station that he received this response: “It’s a disappointment people like you always victimize yourselves solely on the basis of skin color.”

Selden’s suit seeks class action status, and he doesn’t appear to be alone in his claims.

My friend and classmate here at Kellogg had a hateful and racist encounter with an @Airbnb host. pic.twitter.com/rFHlwqy5sQ

Airbnb banned the host referenced in the Tweet above.

“We were horrified when we read these messages,” Airbnb spokesman Nick Papas said in a statement, USA Today reported. “The language and conduct are unacceptable and violate both our policies and everything we believe in. This host has been removed from Airbnb and we’ve reached out to the guest to offer our full and complete support, including ensuring the guest has a safe place to stay.”

The incident in NC was disturbing and unacceptable. Racism and discrimination have no place on Airbnb. We have permanently banned this host.

The New York Hotel Trades Council quickly capitalized on Airbnb’s woes in the ongoing battle between hotels and short term rentals. A new ad, launched earlier this week by ShareBetter, a nationwide organization reportedly funded by the New York Hotel Trades Council, paints Airbnb as unfair and discriminatory to guests but could ultimately cast a long shadow across the entire lodging industry.

The ad tells the story of a guest who claims the sharing site routinely discriminates against her because of her skin color.

“I am a black woman,” she says in the 30-second spot. “I get declined all the time on Airbnb.”

7. Will This Lead to Instant Book on All Listings?

With Airbnb hosts abusing the process of accepting a booking, Airbnb and other sites have the opportunity to use the discrimination issues as leverage to move all listings to “Instant Book” or “Book It Now.”

Since 1) Instant online booking is the best way to increase transactional revenue, and 2) The awareness of discrimination issues is increasing, Airbnb and its competitors now have a paved avenue to move their platforms forward. If they get backlash from the homeowner community, Airbnb can simply say they are battling racism and discrimination. Hard to argue.

We now have 500,000 instant book homes available today on @Airbnb.

If Airbnb moves all the inventory on its platform to “Instant Book,” HomeAway and TripAdvisor are likely to emulate the model as they have recently done with with service fees, cancellation policies, two-way reviews and site design.

Transform Your Business and Face the Competition Head On
VRM Intel Live! Events